As the thunderclouds packed together, the first riders arrive in Samoens, France for the second Blast Epic Enduro Weekend of 2014. The temperature is hot, the air is humid and we’re all hoping the storm stays in the Morzine valley.

Riders from Germany, Switzerland, The Netherlands, Austria and the UK travelled down to one of France’s best kept secrets to spend 3 days of riding, racing and having fun on two wheels.

The HQ for this edition was a sweet chalet with comfy beds, a terrace with a stunning view and …. a jacuzzi! Rooms were divided, hands were shaken and beers were emptied on the terrace as bit by bit everyone arrived. The party ended soon though as all were planning on staying fit for the riding. 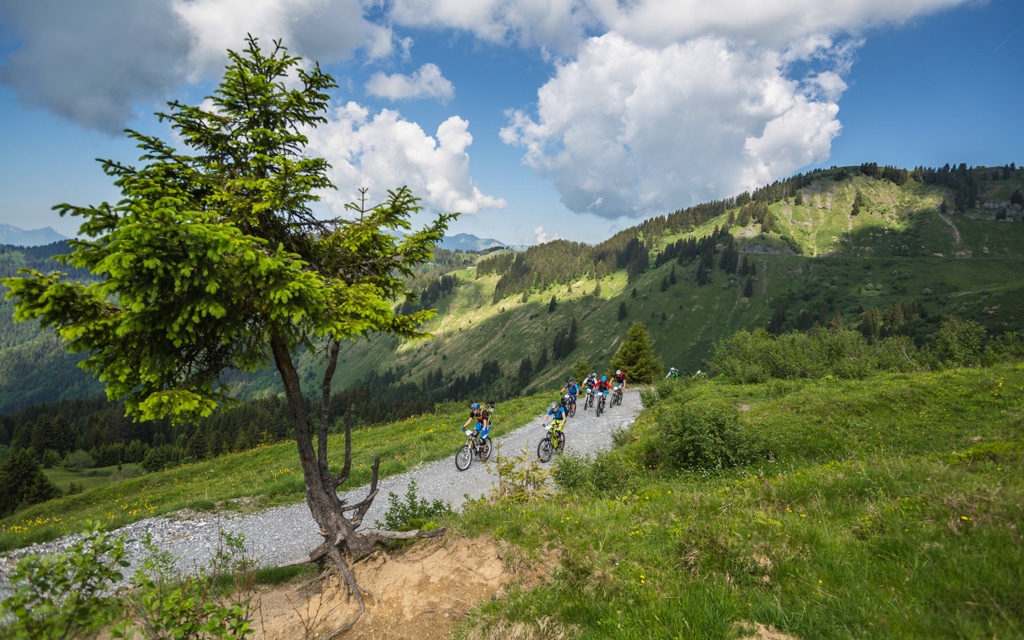 Friday kicked off with a killer breakfast, the briefing and the handing out of the ‘number plates’. As with every Blast, we use nicknames instead, as numbers are way too serious. The Punisher, Dr Dre, Stig, Snorro… plenty of laughs to be had there!

With all the bikes prepped, it was time to load up the trailer and start the uplift to the top of the joux plane.
After a short climb up to the wooden cross and the obligatory group picture it was time for Stage 1 down the Bourgoise.
Flowing single track, tricky turns that roll into a steep set of switchbacks. At the finish it was the smell of burnt brake pads that filled the air as the riders crossed the finish. Two riders already overcooked it and took a minor crash, but the rest all made it down in one piece.

After a group picture moment with some stunning views it is time to descend the high alpine ridge towards Stage 1. The first stage was a short one, leaving the most part of the descent to be enjoyed without the pressure of the clock. Sweet single track, a natural pump track and small trails behind peoples houses and farms led the way down to the valley floor. 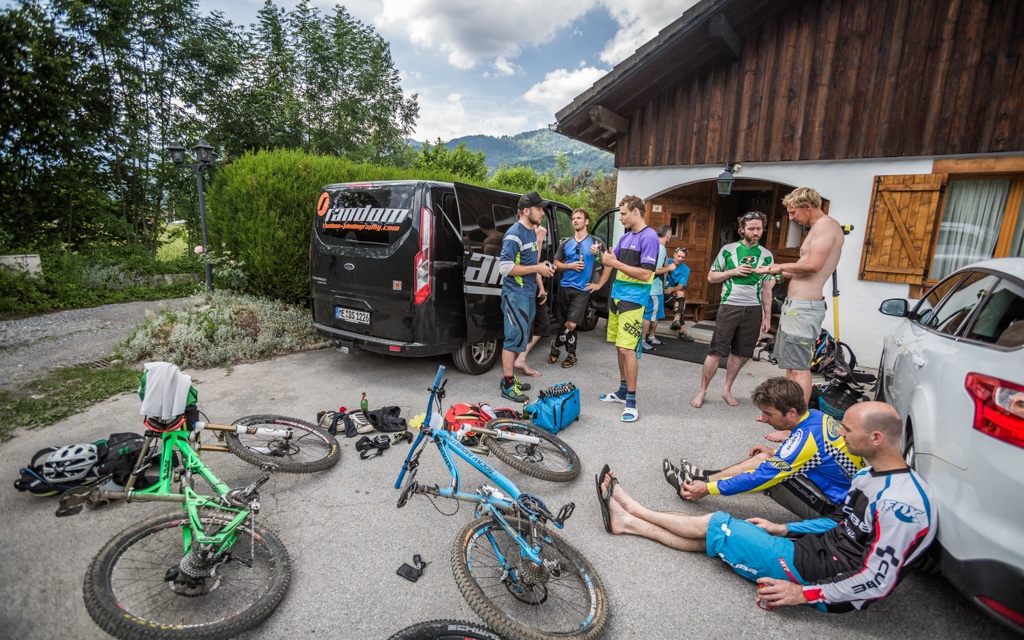 A nice goat cheese, rosette and honey sandwich at the lake were the fuel to go up the hardest part of the weekend; the climb up to samoens 1600. A painful affair even for the fittest of riders. A gradient just steep enough to ride, but definitely outside the comfort zone entertained the group for a good 1,5 hours.
The reward was there however. Next timed special was down the zero-zero track. A rock strewn trail that sets the men from the boys!
With pumping forearms, flat tires and rattled bones the riders crossed the finish line.

A short transfer led us to the ski village of Morillion, where the final special stage of the weekend was waiting for the Blasters. Swoopy forest section followed by a high speed affair over the ski slope leading into a slightly hard to navigate ridge line track. Forestry works ploughed the original trail a bit, but with well placed arrows almost everyone found their way to the finish in one go.First day done, time had come for a last peddle on the valley floor back to the chalet for some cold beer and home made lasagna!

Breakfast at the second day is always an interesting affair. Not only for the fresh coffee and croissants, but also because the race times are announced from day 1. The german front was a strong one this Blast, with some former veteran DH racers and a Transalp guide on the team they were in a league of their own. Dennis ‘ Babirusa’ Stratmann was nailing it on the top two stages, but a navigational error put him 32 seconds off the pace. 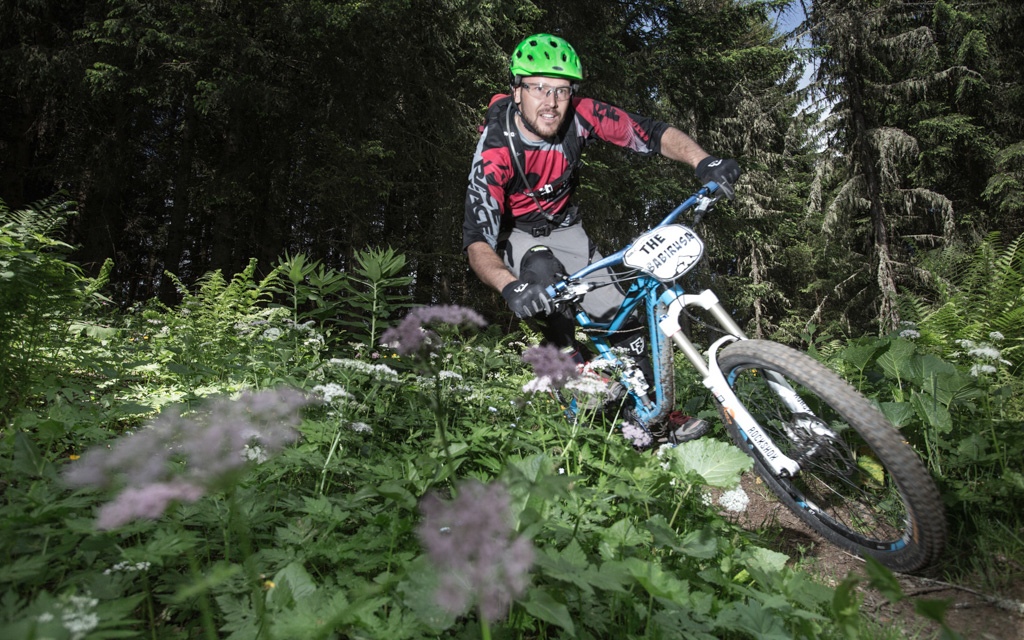 True ‘The Blast” style, we traded the leaders jersey for the ‘Leaders Mullet’, making the fastest rider clearly recognisable out on the trail! Christoph sported this rather warm wig very fashionably through all of the stages!

This day had a little less climbing in it then day 1, giving everyone time and oxygen to enjoy the views. Babirusa switched to a different bike this day to aid him in his mission to catch up on The Punisher. The Mechanicien and Snorro were battling it out for spot 4 and 5 while Dr Dre is sitting comfortably in third spot.

To avoid climbing in the heat the day started off with a 450m D+ climb to the top of stage 1. A long swooping and winding single track carved out in the mountain side. Occasional sharp corners and drop offs kept everyone entertained and concentrated. With the fastest riders just breaking the 5 minute mark, this was one descent to enjoy!
Finishing right almost all the way down in the valley it was time for a quick pitstop at the Chalet for lunch and loading up the trailer for another uplift. 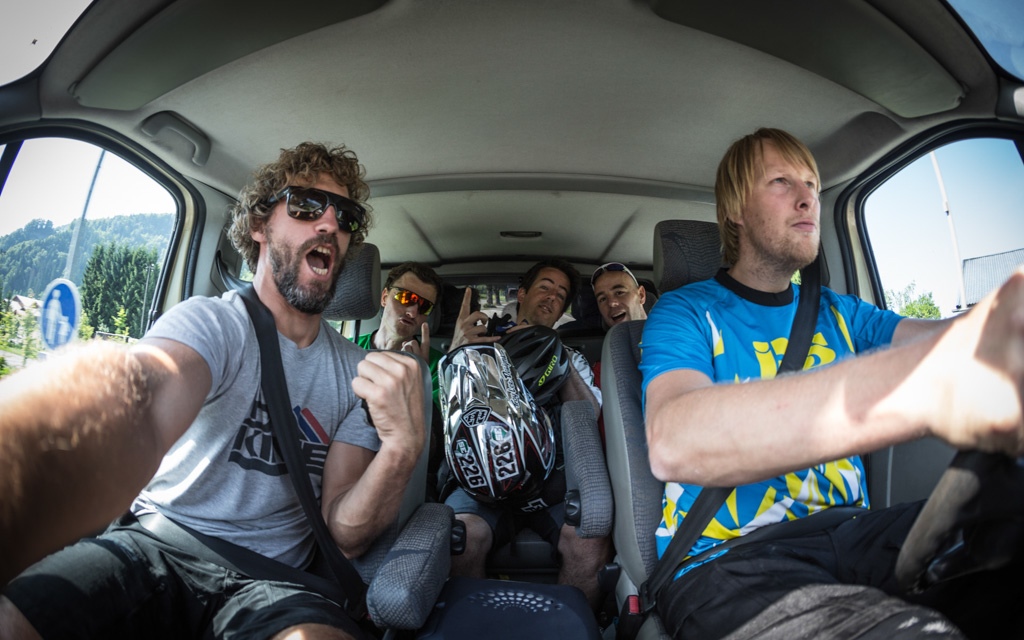 Up at the top of Stage 2 we saw the thunderclouds once again gather further down the valley, we all kept our fingers crossed to keep it dry as we put on our pads. This was the hardest and most technical stage of the weekend. Big rolling bumps on what looked like a natural pump track, followed by super steep, rocky terror served with a sauce of tree roots and rocks. A true struggle to ride, let alone race on time.

With cramped up hands the riders reached the finish, tired but happy to make it down in one piece. AlanMack however wasn’t so lucky. On a wild OTB he ended up in the bush, injuring his finger. After some first aid and inspection, he decided to skip this days last Special Stage and head straight back to the jacuzzi.

With one more pedal n push to go to the top of Stage 3, it was heads down and suffer for most. The weather gods however were with us, and the thunderstorm disappeared in the distance as we climbed up.  Both The Punisher and Babirusa had more or less error less runs, so it was still all up to Babirusa to close the gap from day 1. 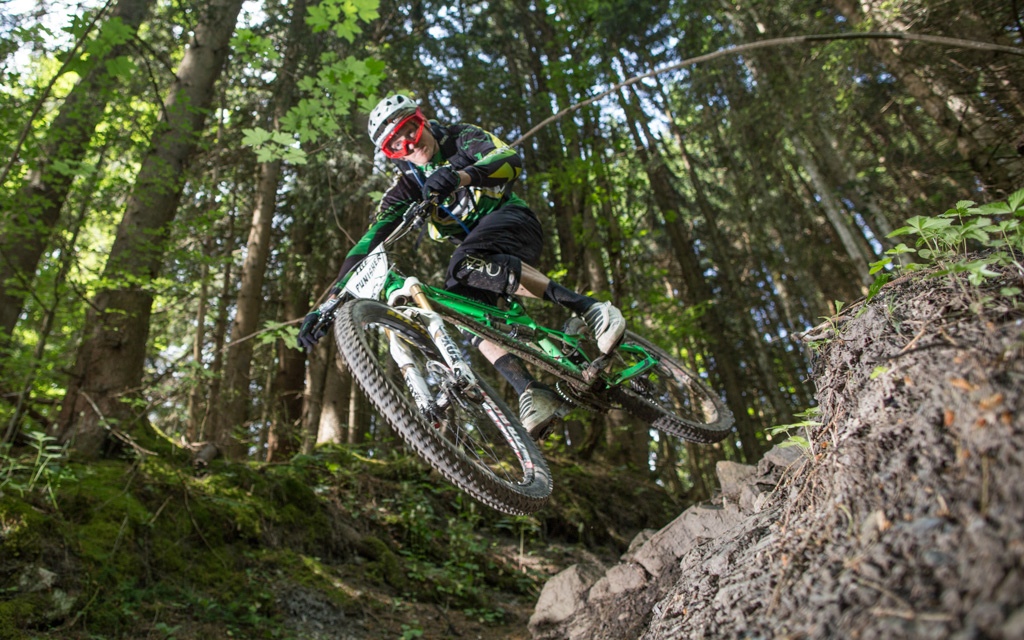 This stage was a high speed affair, and the times show Babirusa took some extra risk to catch up on the leader. A full 5 seconds faster made him stage winner, but definitely not fast enough to take the lead. With all riders over the finish line it was time to relax and ride down some more single track back to the chalet.

Sunday mornings are always filled with mixed feelings. Again the start of an epic day of riding, but unfortunately the last day already.
Coffee and croissants killed the hunger and with the bikes packed on the trailer, it was off to Samoens 1600 for the final stages of the weekend. With 30 seconds to catch up, only a mechanical could keep The Punisher from the podium!

Stage one featured a nasty pedally section and some tight twisters to throw you off. Spring in full bloom meant parts of the track being a bit covered in leafs, creating some navigational challenges. All riders had no trouble finding the trail though, and as a group we moved to the final stage of the weekend. This stage was the same as the 3rd stage of the first day, a great way to see how you can improve if you’ve been down the trail once before. 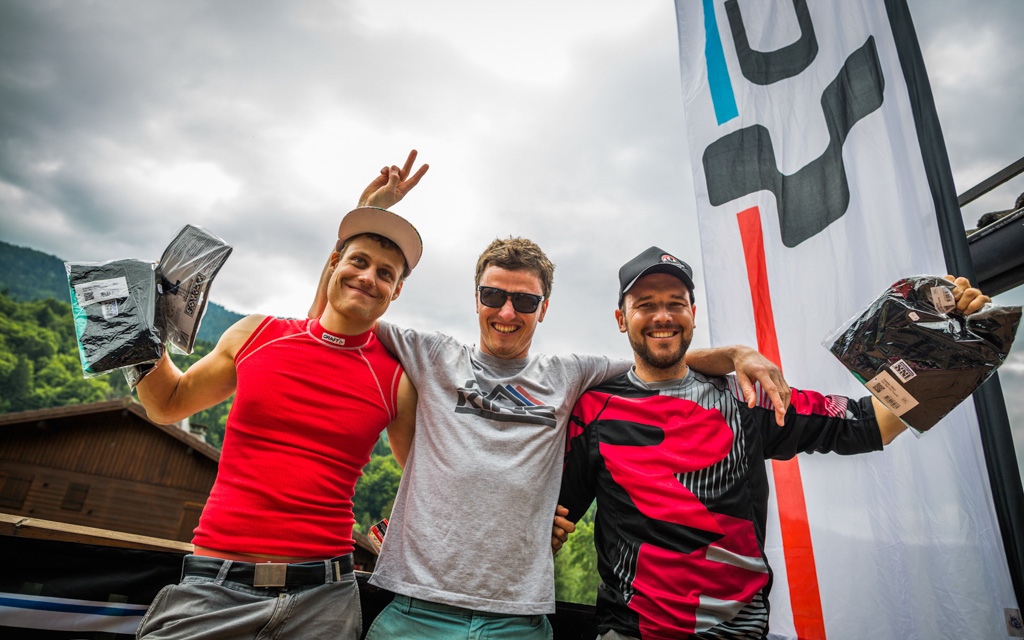 Back at the chalet it was time for a shower and to pack up while the organisation calculated the final standings. Isabelle was the glorious winner in the ladies class, and Alan aka Trev took home the prize for fastest hard tail rider. Top three went down to Germany all the way though. Dr Dre taking in third spot, Dennis Strattmann aka Babirusa taking second after a hard fight with his long time friend Christoph Walter.
Great prizes were handed out from our sponsors Pedro’s, CUBE bikes and IXS to the top riders!
Another great Blast had come to an end! With summer on our minds we are already looking forward to the next Epic Enduro Weekend in Slovenia from 7 – 9 August!